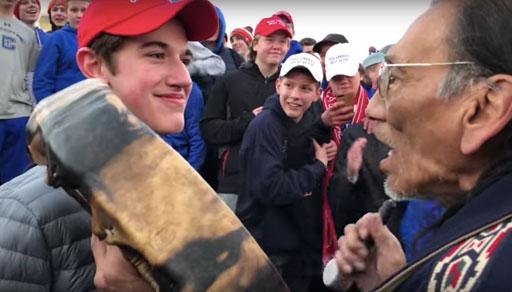 Covington High School Students in the Center of National Mall

On January 18, 2019, several students from Covington high school were filmed during a confrontation with Native American elder, Nathan Phillips. By the next day, the video had gone viral on social media, mainly due to how the teens were wearing MAGA hats. Celebrities from Kathy Griffith to Jim Carrey condemned the actions of the boys online. However, everyone did not know the full story until the full hour-long confrontation was posted on Youtube. In the full video, it is shown that another group, the Black Hebrew Israelites, were taunting Native Americans who were at the Indigenous Peoples March saying insults like “Indian means savages”. After several minutes, the Native Americans ignored them and just went their way. Returning from the March for Life, Covington High School students were waiting for their bus until the Black Hebrew Israelites saw them and began to say racial slurs and that the students are products of incest. Their confrontation started to become more intense since students began to chant. Finally, Nathan Phillips began to use his drum and voiced peaceful chants. This, sadly, had no effect and the Covington High School students began to mock the elder. Witnesses said that the students began to create a mob and started to say “Build that wall” and “Trump 2020”. In the end, the boys eventually left and moved to another area.

When the video was posted, the Twitterverse went into a frenzy. Many users took action by contacting the students’ high school. Others went as far as leaking private information of the students’ families and sending death threats. What the students did was wrong, but keep in mind, they are still kids. Yes, they should be reprimanded, but they should not receive death threats, as the people that send these threats are no better than the students themselves. On the day the video was posted, many people on social media, as well as news outlets, were enraged by an incomplete one minute video as the full video has not been posted yet.

Not going off the full hour-long video was a huge mistake. It shows that “fake news” is, in a way, prevalent within various news stations. Donald Trump stated on Twitter how the students are “…symbols of Fake News and how evil it can be”.  The story was not fake news, it was just not accurate. The story, although incorrect, was based on incomplete information which didn’t allow for a full picture. The media first reported that the altercation was just between two parties, not knowing that there was actually three involved. This brings up a debatable question; Should the media be the first to write on a topic or wait for accurate information?