An artist's rendering for the planned wildlife crossing over the 101 freeway in Agoura Hills, California.

A wildlife crossing planned to be built in California over the 101 freeway has reached its final design stage and should be completed by 2023. Mountain lions in California are at risk of extinction due to freeways splitting their habitat which inhibits their ability to find food and mates. Groups of mountain lions being isolated from each other have caused them to inbreed causing genetic collapse. They have been blocked by freeways being built in the middle of their habitats. This could result in the extinction of the populations in 15 years without intervention. Some local species of coyotes, deer, lizards, and snakes have also been separated by the freeways. This caused transportation officials and conservationists in California to push forward the idea for a wildlife crossing.

A wildlife crossing allows animals to safely navigate obstacles made by humans such as roads, railroads, and canals. They can be built in the form of a bridge or tunnel. The more that are built, the higher the likelihood that animals will use them which helps them more. They are most common in Western Europe and Canada. Only one exists currently in California near Temecula that finished construction in October 2018.

The crossing that will be built in California is now in its final design phase and is on its way to being completed by 2023. The architect for the project, Clark Stevens, hopes that the bridge will look indistinguishable from the area on either side of it for animals crossing it. The bridge will be the largest in the world, spanning 200 feet across a freeway and a small road northwest of downtown Los Angeles. According to officials, the construction will mostly take place at night and won’t cause long shutdowns of the busy freeway. 80% of the funding for the project has come from private sources according to Beth Pratt of the National Wildlife Federation, who is in charge of funding. She has used a mountain lion named P-22 as the symbol for this project. 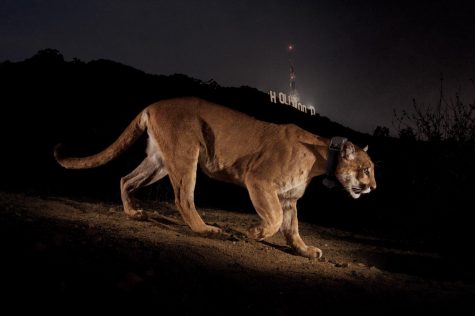 The mountain lion P-22 is well known for crossing two major freeways, the 405 and 101, in 2012 to make it to Griffith Park. Since then he has made headlines across the country and has an iconic photo of him walking at night with the Hollywood sign in the backdrop. His fame makes him a great figure to help fundraise for the project. Despite this, P-22 will most likely not use the crossing because the area that he resides in is too many miles from the location. The California Department of Transportation hopes that this will influence the creation of many other similar projects to help wildlife safely pass human-made obstacles.