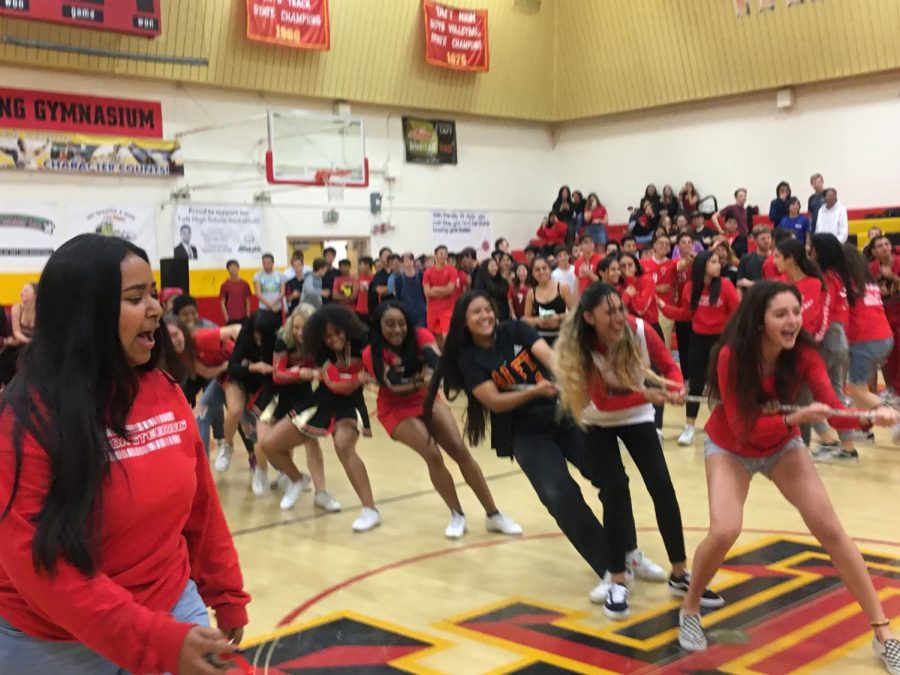 While the rest of the school was taking the PSAT, the Senior Class of 2020 had a game day on October 16 in the gym and Taft Hall to pass time. A completely free senior activity during a mandatory school day sounds like a dream for most. For those that are not interested in games, there was a movie option in Taft Hall that was chosen on the day of. They had 3 choices of Incredibles 2, Avengers: Endgame, or Coco. In the end, Incredibles 2 won and an additional showing of Coco at the end. The events were held from 9 to 12:37 pm. The start time was delayed due to the Senior Panorama picture taken beforehand at 8 am. Students with a lunch pass were able to use it at the given lunchtime of 12:07 pm and did not have to return to campus, as it was the last half hour of the day.
At the start of the day, they waited in line to show their IDs and enter the bleachers through the track for the panorama picture. Seniors on sports teams tried their best to match gear and sit next to each other. Dance and Cheer in the front row and senior steering on a bench in front of the fence. Everyone else piled in and sat with their friends. Though there were issues with spacing, we found our way an hour later when a late bus arrived. After the photographer convinced a couple of groups of kids to stop making peace signs, they cleared the bleachers and headed to check-in for attendance with Senior Steering. Check-in was smooth and quick, which made it easier to send people off for the movie and start the games. Starting with a classic game of Rock Paper Scissors. There was a creative twist to it that made the loser have to follow the winner and chant their name.
Simon Dilger (Senior) excitedly said: “It was entertaining to see how quickly the lines grew!”

This went on until there were two long lines with the best of the best to lead them. Two rounds of that and it was on to the next. A house favorite, tug of war! One round where the girls gave boys an intense run for their money. Then boys and girls basketball faced football. The theme of one sport against another continued for many rounds to come. Another game people were eager to join was a childhood staple, musical chairs. There were eye daggers thrown and mini battles fought. There were apologies given by a young man to a girl he knocked out of a chair all as an attempt to win a game he ultimately lost. Aggression was shown when there was 1 chair and 3 people standing. At points, MC Quinn had to disqualify two counterparts for fighting even though they ended with a hug and a high five every time. 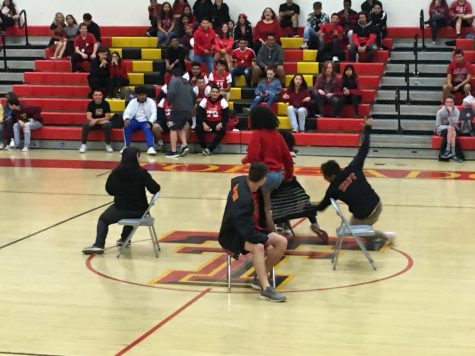 “I wanted to win, at any cost!” DC III (Senior) said concerning his infraction during the game.
Other games included Steal the bacon, six corners, a scavenger hunt, skin the snake, “pie-eating” contest, and a contest to see who could mummify a steering member best.
This was a wonderful event hosted by Senior Steering and had glowing reviews by day’s end. As Snapchats were posted and stories told, juniors are formulating ideas for next year’s Senior Game Day. Memories are being made with every event passing the time.
“I felt true unity between myself and my graduating class”; Dominic Valionis (Senior)
Three years of hard work makes for a bitter-sweet fourth year. Congratulations on reaching the right age and passing enough courses to be afforded a day of play, seniors!