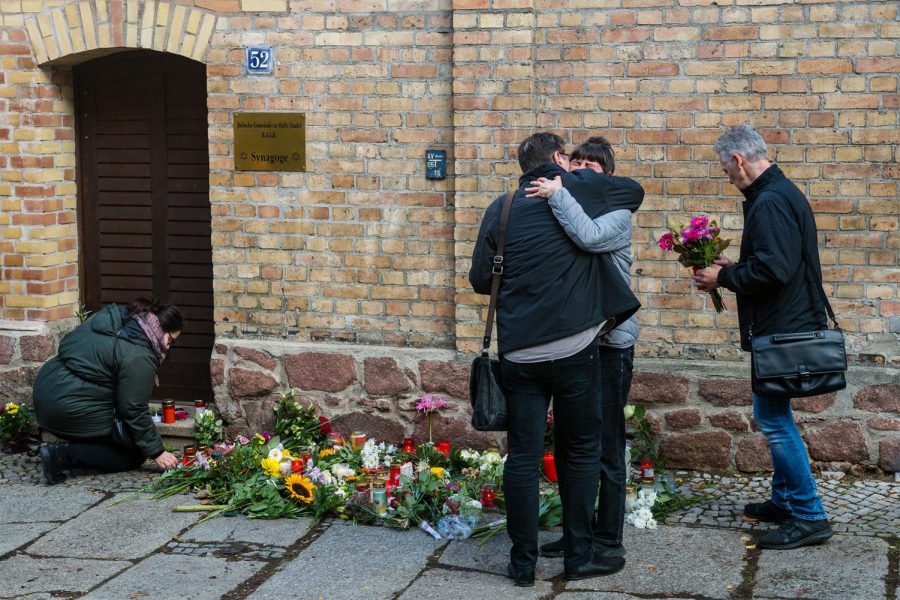 People mourn outside the synagogue in Halle, Germany.

On Wednesday, October 9th, 2019, the second day of Yom Kippur (the holiest day in the Jewish calendar) a man with military gear and multiple deadly weapons killed two people in the German town of Halle, one directly outside of a synagogue and another at a nearby kebab shop. Streaming the incident from a camera mounted on his helmet, he attempted to push in the doors of the synagogue and took multiple shots at the locks on the door in an attempt to get it open. The shooter stuck an explosive in the door and detonated it, yet could not manage to get it inside of the synagogue, sparing the lives of those insides. The attack was streamed live to Twitch, a live video service mainly used for gaming, and an estimated 2,200 people watched the attack in real-time from the service.

The synagogue’s security camera captured the terrifying moments for 51 people barricaded inside of the building, as reported by Max Privorozky, the head of Halle’s Jewish community. The attack took place amidst an increase in anti-Semitism in the country in recent times, and according to CNN, data released by the interior ministry showed that anti-Semitic hate crimes rose nearly 20% from 2017 to 2018, with the number of physical attacks against members of the country’s Jewish community rose from 37 attacks in 2017 to 69 in 2018. Earlier in 2019, the German government advised Jewish Germans to refrain from wearing traditional kippahs out in public following the rise in violence towards the Jewish community, making many members of the Jewish community ask why they are being told to change versus the German government doing something about their terrorists. 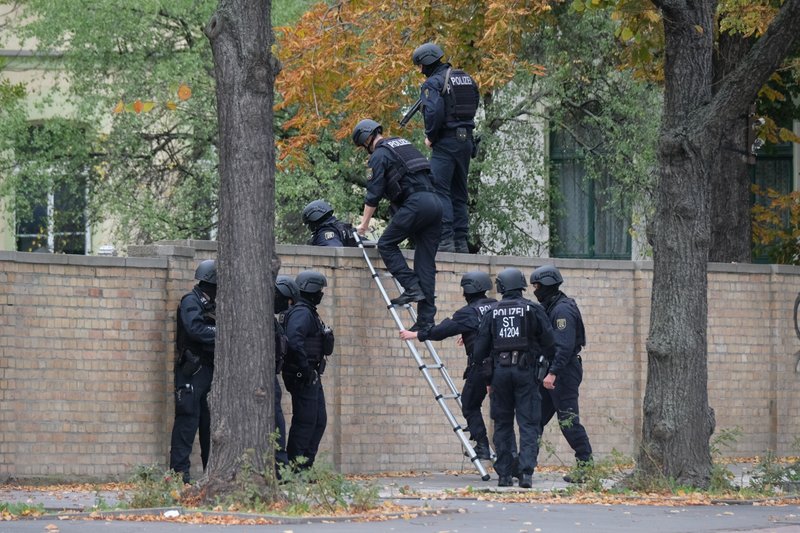 Sebastian Willnow
Police officers cross a wall at the crime scene in Halle, Germany, Wednesday, Oct 9, 2019, after a shooting incident.

On October 11th, 2019, the man named Stephan B. appeared in front of an investigative judge in Karlsruhe, Germany and confessed to the attack two days earlier. He claimed that the attack was a result of his bias against the Jewish community, also showing his right-wing extremist views during his court hearing. Anti-Semitism has been too prevalent in Germany in recent years, and a report last year showed that one in five survey respondents from Germans believed that Jews had too much influence in the media. Far-right groups have also gained popularity in the country in recent years, including the Alternate for Germany (AfG) party, especially in Eastern states (which is where the recent synagogue attack occurred). Previously, AfG politician Bjoern Hoecke called the Holocaust memorial in Berlin a “monument of shame”.

This is a stain on the history of the world, let alone Germany. These Anti-Semitic attacks are simply barbaric and shouldn’t be prevalent in any point of history, especially not the modern society that all of us enjoy today. These attacks show us that our society remains flawed and imperfect and that there is still a lot to work on in our world today.