Teens today are constantly comparing themselves and their lives to either their friends’ life or celebrities’ lives they see on social media every day. In doing so, teens are subjecting themselves to negative body images, poor self-esteem, and even body image disorders like body dysmorphia. Social media platforms such as Instagram are genuinely trying to improve this issue and has made an effort by placing age restrictions on specific posts that sell fad diets or make claims about health and the use of to prevent kids from seeing inappropriate images. As good as Instagram’s intentions were, no teen puts in their actual age when creating an account. Teens don’t like feeling out of the loop when it comes to adult conversations, so they input an older age to get access to some of the less age-appropriate content on the app. So as a result, teens get access not only to the latest gossip but also to the posts of social media influencers that put unhealthy ideas in your head so that you will want to look the way that they do.

Girls, in particular, continuously say that they wish they looked a certain way or that they believe that they’re fat. Some even say that when they’re older, they want to get plastic surgery so that they will “finally” look pretty. Girls are made to feel this way by social media influencers who constantly post about their designer clothes and their plastic surgery. For example, the Kardashians, they have all gotten all sorts of plastic surgery and lied about it! It is people like the Kardashian family that makes girls feel like they’re not good enough, and so when they scroll through their Instagram feed, they start to degrade themselves. One interviewee even stated, “You just see the body that you want to have, and being on Instagram shoves that in your face.”

More than half of the people interviewed said that they wanted to change something about themselves, whether it was their acne, nose, or their stomach fat. Social media was created to keep people connected. It wasn’t made to make people feel less than. Using social media is one of the leading causes of body image disorders. But social media isn’t the only thing that causes negative body image, sometimes being continuously criticized by a friend or parent can put you at risk of negative body image. Even simple remarks such as, “Your outfit doesn’t match” can make a person feel self-conscious.

But it’s harder for some people to gain confidence in themselves and it’s impossible to stop comparing yourself to people. But, if you cleanse your social media of anything and everything that makes you feel unworthy, it will help you feel better about yourself. And once you’ve got rid of all of the negativity on your social media you can then begin to fill up all of the empty space will positive social influencers like Oprah Winfrey, Serena Williams, Alisha Keys, Kelly Clarkson, Demi Lovato, Amy Poehler, Amy Schumer, Shay Mitchell, Millie Bobby Brown and 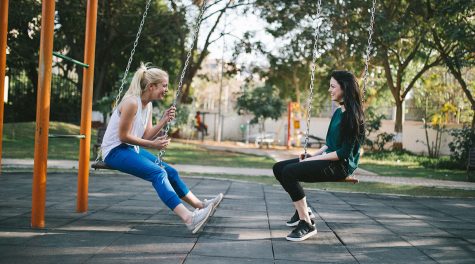 more. Everyone has something that they want to change about themselves, but that doesn’t mean you have to focus on it, instead, try accentuating the qualities that you do like about yourself. This will help boost your spirit and minimize the things that you don’t like. Another idea to help with your self-esteem would be to focus on what you have the power to change. And lastly, build up a reliable support system for yourself. Try and spend time with people who make you feel good about yourself and have a positive influence on your life.