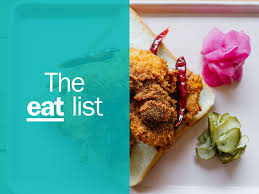 As a native born valley resident and former graduate of Taft, I have spent a lot of time in the San Fernando Valley, and I have eaten many meals here.  Some meals were home cooked, but once my sister and I stopped eating red meat and pork, my mom gave up on cooking and we ordered out A LOT. I have been told by many friends that I am the best order-er and as a self-proclaimed foodie, I think I have great taste (Of course- don’t we all?).  Because of this, I have been asked to share my favorite restaurants in the west valley (going as far as Encino) with you.

Before we get too far into our food journey, I am going to pass on some personal information.  I have not eaten red meat or pork since seventh grade, sometimes chicken grosses me out and I try to eat a mostly plant based diet.  So, keep in mind that this impacts all food related decisions that I make, and try not to judge too harshly. I am always open to suggestions, if you think you have a good place for me to try out, let me know!  I have not tried all the yummy spots and am always looking for new eateries. Of course, there is always a place for chain restaurants like California Pizza Kitchen and Cheesecake Factory, but why not support a smaller, sometimes family owned restaurant that makes delicious food?

Today I want to focus on pizza. First, history:

According to Gayle Turim, it is widely known that something similar to today’s pizza was enjoyed by ancient people in the Mediterranean Region.  However, pizza as we know it today, was invented in Naples, Italy. In spite of this, pizza became popular in America before its popularity grew in Italy.   Although, there is much debate over which pizza joint served the first slice in America, it is agreed that pizza was brought to our East Coast by Italian immigrants in the late nineteenth century.

Pizza made its way to the West Coast sometime after that and we have been scarfing down the delightful, salty, cheesy gooey-ness ever since.  I do recognize that pizza is not for everyone, I -myself- did go through a phase where it was not at the top of my list, but that was short lived.  Pizza has played an important role in movies like Home Alone and Fast Times at Ridgemont High and has been a staple on campuses across America. It even has its own holiday.  National Pizza Day is celebrated on Feb 9.

My favorite pizza in the West Valley is Topanga Pizza in Woodland Hills.  Family owned and run for over twenty years, Topanga Pizza has been serving up warm gooey deliciousness since the day it opened.  Though, I have not fully explored their menu, I have never eaten anything from there that I don’t like though. Once I find my jam, I never really stray far. Now, once again- remember, veggie based diet- so for me- pizza heaven is regular crust with mushrooms, black olives and garlic (which they slice into paper thin slices and spread all over the top).  The crust is soft and pillowy, without being too thick or soggy with just enough cheese to get that stretchy string when you bite it, but not so much to drown out the other toppings. The garlic rolls are nice and big with just a hint of garlic and herbs, and not drowned in oil like other versions at competing restaurants, and of course, served with a side of warm, tangy marinara sauce.  A small mixed green salad (must order it chopped) rounds out my order. Topanga Pizza has a full menu of pasta, meat dishes and sandwiches (we’ll talk about sandwiches another time), but I confess that I have only had their pizza.

If you are looking for a decent slice from a fast delivery chain, my favorite is Guido’s Pizza.  This pie checks all the necessary boxes of warm, salty, cheesy comfort that is expected from a pizza. With multiple locations throughout the valley, they are a dependable alternative if Topanga Pizza is not an option for you.