Prom is the one event that every senior anticipates when they start their last year. See how this year’s seniors enjoyed their prom, 007 style. 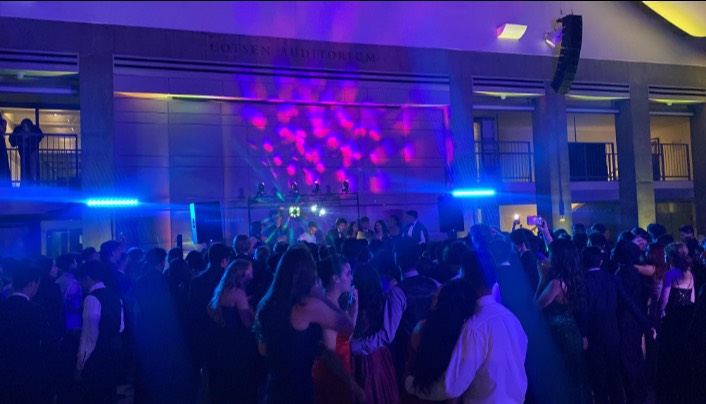 A beautiful view of seniors celebrating at this year's prom

WOODLAND HILLS, MAY 2 – On Saturday, April 30, 2022, Taft’s Class of 2022 all flocked to L.A.’s notorious Skirball Center for a night of dancing and unforgettable memories that they shall treasure forever.
A Venue Fit for A Spy
Known for its elegance and memorability, The Skirball Center was the perfect place to host fancy occasions, especially prom. Upon entering, there was a red carpet that led to some James Bond posters and a sign with twinkling lights that said “Taft High Senior Prom”. At the end of the red carpet, students were met with a glamorous light-up 007 sign, which was the main attraction for those who were eager to take pictures.

The outside of the venue was very confined as everyone had been taking pictures, eating, and catching up with friends. There were a few tables, which were covered by simple black cloth, the food and ice cream displays, two bars, and two photobooths. The doors to the inside venue didn’t open until approximately 8 p.m.

The inside venue was wide, but also confined leaving many prom-goers without a table or somewhere to sit. Just like the outside, the tables were covered in a simple black cloth. There was a candy table with a variety of sweets such as Twizzlers and chocolate. Nevertheless, inside was 007-themed gambling tables in the corner, an allusion to the Casino Royale movie.

Yet, many people were disappointed with how the 007 theme was executed and incorporated into the decor. “I feel like only the entrance was in the 007 theme, everything else was a miss. It didn’t really feel like a spy movie.” said Michael Gonzalez, a disappointed prom-goer.
Suits, Ties & Dresses to Die For: The Theme
All 007 movies are known for their chaos as well as the dressed-to-the-nines attire.Tuxedos are a big statement in all the movies; they are often the first thing that comes to mind when you hear the name James Bond. Most of the male attendees wore simple black suits; anyone who had a date appeared to be wearing a tie, bow tie, or pocket square that matched the color of their date’s outfit.

“Everyone looked good, I just felt like all the guys looked the same,” said Michael Gonzalez.

There were many different styles of dresses and colors at prom. The most popular dress style was a straight gown with either a sweetheart or straight neckline and a leg slit. The most common dress colors were black, red, and dark green. Many of the dresses were made of satin material and had a lot of eye-catching sparkle. Everyone had colorful, elegant makeup to match their dresses and accessories. There were many blinged out nails and shiny hair clips that contributed to the 007 theme.
Don’t Stop the Music (or In some cases, please do): The Music at Prom
As any true Bond fan would know, music plays a crucial role in the films. However, Taft students considered the music at the 007 Prom to be either a hit or a miss. Taft students were divided on the DJ’s ability to balance out the music that he played. There was no variety in the DJ’s selection; the genre stayed the same the whole time. Prom-goers who brought their dates anticipated having some time to dance the night away with their dates, but were met with inclusive EDM (electronic dance music) that everyone started jumping around to. Mosh pits gathered around on the dance floor, leaving some feeling eager as it made them feel more comfortable since they didn’t have a date to slow dance with. However, others were injured as people were stepped on, pushed and hit.

Though this year’s prom fulfilled the hopes and dreams of some, many students’ concept of prom had been ruined. When one thinks of prom, they think of slow dancing the night away and spending time with their date, but this year, it was the complete opposite. Many prom attendees were disappointed in the choice of music, as it didn’t really fit the theme of prom itself. Throughout the night, Taft students expressed their grievances about the DJ and his music choices. However, Taft students did not let the music stop them from having the best night of their lives.
“Shaken, not stirred”: Food at the Prom
The food served at this year’s prom was so delightful that Bond himself would approve. Items such as burgers, fries, chicken tenders (that were crispy but not too crispy), pasta, and even sushi were on the menu. The sushi was nicely presented on small wooden plates. Bartenders in the front and back of the venue served up drinks ranging from Sprite, Shirley Temples, and Sierra Mist that were served in plastic martini glasses that fell apart rather quickly.

When the clock struck nine, the ice cream bar opened. The bar was led by Sub Zero Nitrogen Ice Cream, who made ice cream on the spot with nothing but liquid nitrogen. Upon getting to the front of their line, students could feel the chilly air from the nitrogen tanks wafting over their arms as caterers whipped up flavors such as Birthday Cake Capacitor, and Bernoulli Brulee, and Chocolate Conduction. Watching the two caterers freeze ice cream on the spot was an interesting sight to see. They even had the longest line throughout the night.
A Royale Bond
There were five couples who ran for the title of Prom King and Queen: Alfredo Loyola and Kaitlin Simon-Levitt, Alissa Jones and Arman Pourman, Kellie Glowaski and Matthew Literman, Marianne Henriques and Jason Umana, and Yasmin Shenassa and Justin Hedvat.

There were three rounds of voting in total, the final round ending at 9:45 p.m. at prom. The winners were announced at around 10:30 p.m. after a few sentimental speeches made by Geroge-Alex Chicha, the senior class president, Yasmin Shenassa, and some faculty members such as Mr. Steiner.

The senior class voted for Marianne Henriques and Jason Umana to be the Prom King and Queen. After all the cheering and enthusiasm from their classmates, Marianne and Jason took the dance floor to have the traditional first dance. They were surrounded by everyone there, and they took the spotlight as they danced to “Can I Have This Dance?” by Zac Efron and Vanessa Hudgens. Everyone then joined in and danced to “Careless Whisper” by George Michael at prom.